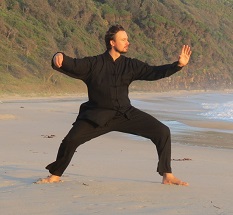 The current head instructor of the Kung Fu Academy (KFA). He started his training in Kung Fu at age 12 under the guidance of Si Gong Keith Blackburn (view Academy History for more details). Shi Fu Teja quickly fell in love with the art and with his teacher, and he trained and competed intensively for several years before obtaining his Black Sash.

In 1997 he went to the People’s Republic of China for the first time, then returned to run the KFA under the guidance of Si Gong Blackburn. Undertaking undergraduate education in Traditional Chinese Medicine, he sojourned for a year in the Yunan Province, PRC, focusing on traditional Shaolin forms, weaponry and Taiji.

Since the passing of Si Gong Blackburn, Shi Fu Teja has been running the KFA with a strong team of fellow Red Sashes, Black Sashes and student instructors.

At what age/year did you start training and what prompted you to do Kung Fu?
I started with Si Gong Keith when I was 12 years old, and was only able to train sporadically.  From 14 years onward I started regular training and from 15 years I was there daily.
Who did you train with and how long did you take to reach your Black Sash, start teaching
and ultimately, achieve your Red Sash and become a Shifu?
In the beginning it was a very small class, but the main instructors who were helping Si Gong Keith were Laoshi Richard Kray and Sifu Sean Harnett.  I was very impressed with their
strength and flexibility, which drove me to improve my own skills.  Once I was training regularly I met up with Monte Partridge, and we became training partners.  Together we
achieved our Black Sash certificates when we were 17 years old and became the main instructors at the Academy under Si Gong Keith.
After a trip to Beijing in 1997, I decided that I wanted to pursue Chinese Medicine and, after a traineeship with a local physician, I began my formal education in 2000 at the University of  Technology, Sydney.  There I completed a Bachelor of Health Science in Traditional Chinese Medicine and a Bachelor of Arts in International Studies, which included living for a year in  the Yunnan Province of China and studying at the Yunnan Shifan University.  During that  trip I spent time training at Wu Wei Si, a Kung Fu monastery in the hills outside of Da Li.
When I returned home, I started my practice with my wife, Jacinda.  It was 10 years after I received my Black Sash that Si Gong Keith awarded me the Red Sash and the title Shifu.
When Sigong Keith became ill with Motor Neurone Disease he asked Sifu Monte and I to take on the Academy and keep his teachings alive.  For the last few years Lao Shi Sarah has  taken over the administration with me.
What else do you do when not training at the Academy?
I am mostly in my clinic treating patients, but otherwise I am spending time with my wife, and daughter Lianah or working on my Bonsai trees.  I am currently working on Masters in Chinese Medicine at UWS.
Tell us about the books you have written.
When I was 17 I wrote a book called “Yi Sheng” (Remember the Spirit), a martial arts novella.  My second book I co-authored with Dr Yaron Seidman from the USA, called “The  Lost Heart of Medicine”.  My latest book is “The Ledger of Good and Evil:  A Manual for  Humanity”, and I am currently working on a book that covers my area of clinical interest  called “Warm Womb:  The Physics of Fertility”.
What would you say is your biggest achievement so far?
My daughter.  More of a gift than an achievement.
What other achievements have you made?
I hope that I have made some achievements as a teacher and a clinician and perhaps some of the words I have written will achieve something…
What do you do in your spare time to relax?
Bonsai has become an obsession, any spare minute will be out with my trees.  I play the  guitar and a little piano but don’t invest enough time in them.  If the opportunity arises I go  fishing!
What do you wish to achieve in the future?
Inner peace…
Buy now