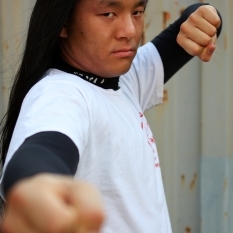 Shi Fu Nick, the other half of the 2010 black sash duo has been a member of the academy since 2008.Throughout that time he has been a constant and reliable support to the academy and it’s students. Shi Fu Nick’s affinity may be with weapons, however, he is equally skilled at combat techniques and Taijiquan. Shi Fu Nick started at the Academy in 2007. In 2008, he joined the instructor crew. Two years later, in 2010 Nick achieved his Black Sash. Shi Fu Nick has made the Kung Fu Academy his second home, you can catch him there almost any and every day of the week. In 2013, he and a small group of instructors from the Kung Fu Academy travelled to China where they trained in traditional Shaolin forms at the Shaolin Temple in Henan Province, and then moved to the Wudang Temple in Hubei Province, furthering their Taiji skills. In 2021 Shi Fu Nick received his Red Sash, earning his title of ‘master’. His martial arts interests vary from acrobatics to combat and sparring but specialises in making weapons out of any object. As an instructor, his goal is to help you achieve yours, whatever it may be. Shi Fu Nick holds a Bachelor of Science: major in heart and circulation from The University of Sydney, and is currently in his final year of study for a Health & Science/Physiotherapy degree. His other interests include action filming/photography,exercise/movement science, music (particularly the piano) and a love for travel.